Jack showed up at 7:30 this morning and headed straight up to the attic. He first installed the thermostat in the second floor hallway and then attacked the ducts that were sticking straight out of the floor in the middle of the attic. Since we're planning on finishing the attic (at some point in the future), he needed to pull the ducts through the joist pockets and cut holes for them near the edge of the attic floor.

Bo arrived and they both went to town preparing the attic for the last run of ducts to the most inaccessible part of the house (for ducts, that is): the breakfast room, the kitchen, and the half bath next to them (which used to be a pantry).

Now in my experience, when someone with a Sawzall wants to get from one side of a wall (joist, floor, what have you) to the other, he usually plugs it in, adopts a maniacal grin, and starts hacking away until he's got a Huge Gaping Hole, paying little respect to old fashioned things like structural integrity and load-bearing members.

Well, Bo used his Sawzall to painstakingly whittle the smallest opening possible in the joist and sill plate at the top of the rear wall of the house. Here's a slightly blurry photo of his handiwork:

Now that's what I call art! The hole he made is just big enough to snake six ducts down to the breakfast room, kitchen, and 1/2 bath.

They cut away a small part of the half bath ceiling to receive the ducts from above and used the bathroom ceiling as a junction space to run the three outlets to the breakfast room (which involved cutting through more brick), one to the bathroom itself, and two outlets to the kitchen. Speaking of which, they draped the kitchen so thoroughly that it looked like a hazmat cleanup site:

And when they were done, they cleaned everything perfectly! So now all the ducts are installed and the only cosmetic fix we need to make in the whole house is to lower the half bath ceiling about 4 inches to hide the ducts running to the breakfast room (and that was expected):

And the blower arrived today along with the attic plenum ducts. They moved the blower into place and began to lay out the air return duct (A whopping 24" in diameter!) and the 9" plenum ducts to get an idea of how everything is going to fit together:

But what really amazes me is how this blower is going to take in air from this huge hole: 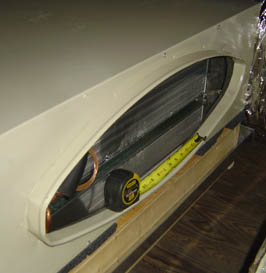 And manage to squeeze it out of this tiny one: 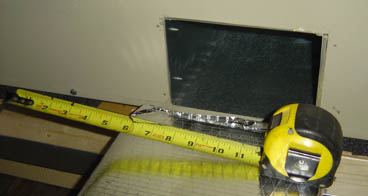 Considering that the blower pulls the returning air over the chilled coils and then forces it out of that tiny hole, I can almost envision it squeezing the humidity out of the air.

Anyway, the most disruptive work--installing the ducts--is done, and I hardly noticed that the guys were here--I couldn't be any happier with the work they've done so far!

I'll close out this entry with some photos of our lovely new air outlets. 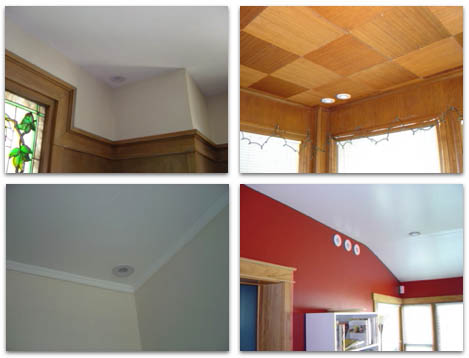