Based on that I'm going to do a day-by-day play-by-play of the install process in the hopes of giving some future installee a look into the process. Right now I don't know if they're going to leave great big holes in all my walls and plaster dust all over everything or what, so I'm a little nervous about the whole thing.

If you're not looking to get AC installed in your house, you may want to just skip the next 8 entries (or run the risk of dying of boredom). You have been warned. On to the details:

Our two installers from American Vintage Home, Jack and Bo, arrived today at about 11:30AM and began unloading their truck into our attic. Bo put on shoe covers, laid cloth tarps in the front foyer and the second floor hallway while Jack started placing supplies and tools on the front porch (which Bo relayed up to the attic). They got everything upstairs pretty quickly when their project manager, Dmitry, arrived to do the initial walkthrough with the three of us. 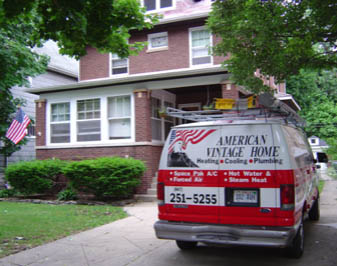 We started out by discussing the placement of the blower unit in the attic. M. and I want to add a dormer to the North side of the attic, so I made sure that the guys would put the blower as far into the Northeast corner of the attic as possible to avoid taking valuable floor space away from the future attic room.

We then went through every room in the house to discuss where each outlet would go. When J.R. first came out to give me their quote for the install, he took detailed measurements of every room and every window. He used this information to calculate the "heat load" of the house, and consequently, how many air outlets would be needed for each room in the house to keep the house evenly cooled (as well as the "tonnage" of the blower and condenser). Based on this, a room with more windows would have more outlets, and a room on the West side of the house would have more outlets than an identical room on the North side of the house. Furthermore, Dmitry explained to me that the outlets should be placed in each room as far from the air return as possible, but not in a place where they'll blow cold air directly onto someone (like over a chair or a bed). This means that the outlets typically get placed in corners, above windows and above radiators.

This all gave me a pretty good feeling about the team, but then again, no one had started sawing holes in the house just yet either.

Jack set to work in the attic while Bo covered the entire guest room in cloth tarps and plastic sheeting. Thirty minutes later, the two guest room outlets were installed, the tarps were rolled up, and any remaining mess had been vacuumed up. Aside from the two new outlets (and the Space Pak outlets are almost entirely unnoticeable too), you couldn't tell anyone had been in the room at all!

Mind you, I had resigned myself to living in a construction zone for the 7-8 days of the install, but it looks like they really meant it when they said that they would take great care to keep the Old Man clean during installation. Their literature even claims that they'll "leave your home as clean as we found it."

Over the course of the rest of the afternoon, they worked their way clockwise around the second floor, covering the room in progress with tarps and plastic sheeting, drilling the hole for each outlet, feeding the duct tube in through it, and attaching the plastic port to the duct and the ceiling. In addition to the two outlets in the guest room, they installed one outlet in the hall, one in the hall bath, five in the front office, one in the bath off the office, and three in our bedroom. By the time they knocked off, all 13 outlets on the second floor were installed! And, as promised, the whole second floor was as clean as they found it!

They've given me a worst-case install time of eight days, which means that they'll finish by the 24th. The downside is that installing the second floor outlets is by far the easiest part of the whole install--getting the tubes down through the walls to the first floor (and out through the brick in some cases) is going to take a bit more work.

So far, these guys get an A+. Professional, communicative, neat, and detail-oriented--what more can you ask for?