The Big Red Fan of Death

Last year, a mere two weeks after we purchased The Old Man, I was at a conference in Oregon. At that conference I ran into my friend Chris who I hadn't seen or spoken to in months, mainly because he had moved to England earlier in the year. We greeted each other and when Chris asked how I was doing I told him that we had finally found a house and we were really excited about it. And he blurts out,

"Oh yeah! I heard about The Big Red Fan of Death!"

Now seeing as Chris has been living in Europe and I haven't spoken to him about the house AT ALL, much less about THE BIG RED FAN OF DEATH, my brain pretty much stalled and proceeded to do flip-flops for a moment.

How did Chris know about The Big Red Fan of Death? Was he a spy? Was The Old Man bugged? Was my neighbor with the tin-foil hat really onto something?

The only people that knew about The Big Red Fan of Death were (the four) people who had actually been to my house, and Chris did not (to my knowledge) know any of those people, nor was he one of those people.

I looked at Chris and drooled intently for a moment.

After regaining my voice, I managed to stutteringly ask Chris how on earth he knew about The Big Red Fan of Death.

To make a really long story only slightly shorter, it turns out that he found out about The Big Red Fan of Death from Greg, a friend of mine that Chris didn't even know.

Greg had been in town the month that we closed on the house, and he had stopped by The Old Man while I was ripping out the basement ceiling. Greg had been so very impressed by The Big Red Fan of Death that, upon returning to the West Coast, he regaled an entire party with a story about his visit to The Big Red Fan of Death. Chris had, of course, met Greg at that party.

And so The Legend of The Big Red Fan of Death was born.

When we first saw The Old Man, we noticed that he had no central air conditioning. We knew that we'd want to install central air, but figured that the ceiling fans would help keep us cool provided we could get some breeze through the windows.

When we opened the door to the walk-up attic, we were greeted not by a light switch, but by a strange clock-like protuberance on the wall: 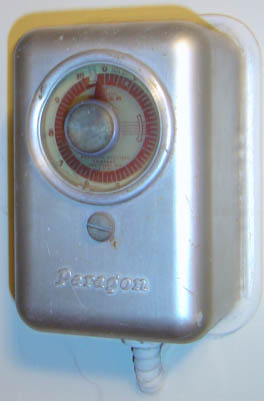 Odd, but not the strangest thing we'd seen in a house--perhaps some sort of light timer? However, eight steps into the attic, we found ourselves facing another door. After opening the second attic door, I stepped up into the attic, and before I could vocalize the question of why anyone would put a second attic door halfway up the stairs, I saw it. I saw The Big Red Fan of Death. 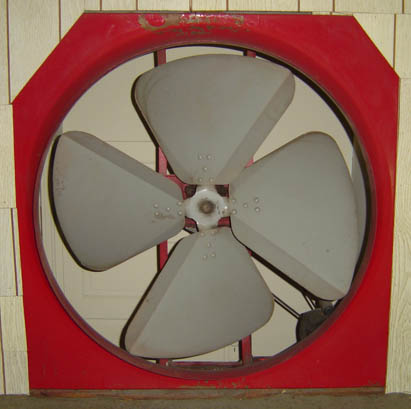 Now it may be hard to get a sense of scale from this picture, so here's another picture with my cordless drill (fearing for its very life, I might add) sitting in front of The Maw of The Big Red Fan of Death: 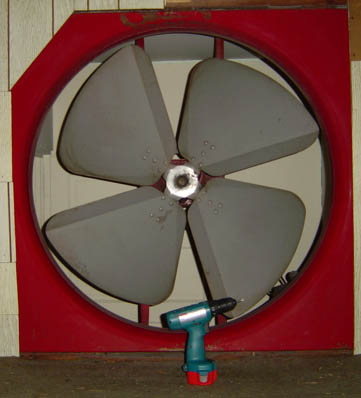 For those of you who are counting, that's a whopping thirty-six inch diameter, twelve inch deep fan blade. It's powered by a small motor that's mounted to the base of the fan. This remarkably quiet motor drives the fan by means of a fan belt: 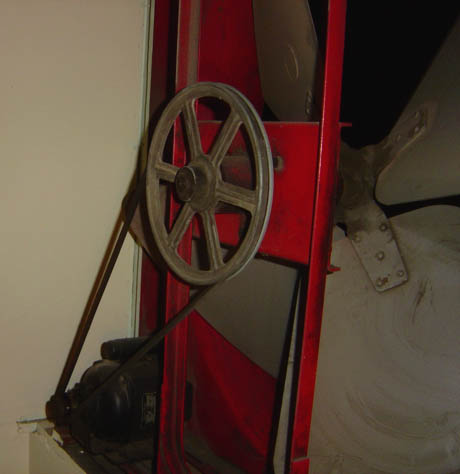 So, by opening the main attic door and closing the second attic door (on the steps), you effectively make the fan the only means for air to pass into (or out of) the attic. Open the attic windows and a few windows in the house, and you can turn on The Big Red Fan of Death, and draw a profound amount of Fresh-Air through the house. I know it's Fresh-Air because The Big Red Fan of Death says so:

If you stand in the attic doorway while The Big Red Fan of Death is on, you can actually feel the air pulling you into the stairwell. Since we don't have any kids (or small pets, or birds, or elk), we used The Big Red Fan of Death a few times last fall before we moved in (despite the fact that our home inspector wrote DO NOT USE in HUGE letters on our inspection report). It works amazingly well at drawing the hot, stale air out of the house. Whoever installed it was obviously a genius.

It has no safety features. None. At. All. You could easily lose a finger in this fan. Or an arm. Or a small child. Or a Zebra.

It has no screen, no grill, no grate, no bars, no warning label, no nothing; zero, zip, nada, a big fat goose egg. What's the international symbol for "decapitation hazard" anyway?

This is the kind of fan that would make Darwin proud.

But maybe I'm being short-sighted here--if you had kids in this house, you could really take advantage of having a Big Red Fan of Death handy:

Mom: Eat the rest of your vegetables!

Son: Plblblblblbttt! I don't have to!

Dad: Pick up your room!

Dad: Remember what I did to your former sister when she didn't clean up her room?

And that's the story of The Big Red Fan of Death.