Rumors of My Sanity Have Been Greatly Exaggerated

In the interest of putting to rest any rumors that I'm a sane man, this weekend, I bought a bowling lane.

I found an ad on craigslist a few weeks ago from a guy who is losing his storage space and needed to sell 8 and 16 foot sections of bowling lanes, for $10 a lineal foot. These lanes are 2.5" thick, 42" wide, and made out of hard maple, so that's $10 for 3.5 square feet of rather substantial maple--an amazing price for something that's a) usually very expensive b) somewhat difficult to find, and c) extremely heavy. Heck, they don't even use real wood in new bowling alleys anymore (they use a [much cheaper] composite). 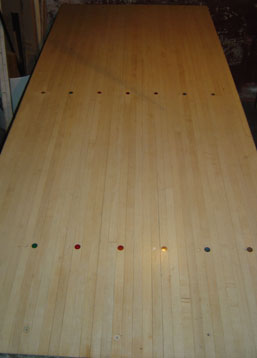 These particular lanes were salvaged from Marigold Bowl, a 32 lane bowling alley that opened in the early 1940's a few blocks from The Friendly Confines of Wrigley Field. Unfortunately, the recent rise in popularity of the neighborhood caused a corresponding rise in property taxes which forced the owners to close the alley in May of 2004. It came as no surprise to me that the site was sold to a developer who is going to build more "luxury loft condominiums". Some progress, huh?

So why would I want a section of an old bowling lane? Well, I wanted to use it as the top of a workbench in my basement work area. A friend of mine, who is also one of my remote woodworking mentors (i.e. I pester him on AIM every night with woodworking questions), built a workbench for himself out of a section of bowling lane. Not only is it a beautiful workbench, but it's incredibly durable and sturdy. I often dreamed of having a similar workbench, but figured I'd most likely wind up settling for a bench with a plywood top.

So, having found a place to buy the lane, I had to get the lane itself back to the house. After pestering a few (very busy) friends who had pickup trucks, I finally called our nephew S., whose friend has a huge conversion van. S. and his friend agreed to lend me a hand, so they came over on Saturday morning and we headed out to an industrial section of the city to pick up the lane.

Now, the aforementioned mentor warned me that a section of bowling lane is heavy--to the tune of 200-300 pounds. I mentally stacked 3 sheets of 3/4" plywood in my head and assumed that he was exaggerating somewhat.

He wasn't exaggerating. Not even a little.

We met the seller in an old city warehouse that had over 100 16' sections of lane stacked inside. While I really wanted a section of lane with the old lane markers on it, in the alley, those sections are right next to the "splice" (where the maple boards were spliced with (cheaper) fir boards), and the sections in the warehouse were in bad shape, so we just took a section of maple that was already cut to an 8' length.

When I say "took", I'm glossing over the sisyphean struggle it took for us to get the section into the van. This piece of wood weighed so much that the four of us had to slide it over and into the van instead of picking it up and placing it in the van. In the hopes of using some of this wood for a countertop, cutting board, table, go board, or something similar, I went a little overboard and bought two more sections.

When we got back to the Old Man, we muscled one section into the basement by rolling it on small pieces of pipe, thumping it down the concrete steps (Rattling both the kitchen table and M.'s nerves). Once inside the basement, we (meaning "mostly S. and his friend") hoisted it onto a temporary base made out of a heavy-duty wire rack (rated to 500 pounds) and some milk crates. We then placed the other two sections against the back wall of the garage for later use, providing the garage doesn't fall over first.

Today, I ran over to Lee Lumber (Another great recommendation from House in Progress) and picked up 15 pine 2x4s. Using some plans from an old Woodsmith magazine as a guide, I'm going to glue them up into 4x4s to make a sturdy base for my bench. Stay tuned for more insanity!