Home Depot sent a Door Installer over to look at our door and determine how much installation's going to cost. It turns out that the cost to install a $150 door and a $79 screen door in our non-standard breakfast room is $680 worth of labor. Ahem, no. I'll be installing that myself (maybe with the help of a friend). The lesson here is: If your current door and wall are not the *exact* height, width, and depth of a standard pre-hung door, you're a prime candidate for fleecing.

Lastly, The Cleaning Company came by to give us an estimate for cleaning the house top to bottom, and they charge an hourly rate, so no worries there--we know the house is filthy.

We decided to go with Nex Flooring to refinish our floors, and they're coming tomorrow at 8:00AM to start work. Nex Flooring is a family business run by a father and his two sons, and they got fantastic reviews on a local referral service, and their estimate seemed extremely reasonable. Before we get to redoing the floors though, a few words about the floors as they stand right now.

The downstairs wood floors were covered in carpet for an unknown duration of time, along with a runner up the center of the stairs--this travesty in all likelihood saved the floors a helluvalot of wear and tear, so it's not All Bad. The wood floors throughout the house are red oak (except the kitchen, which is maple), and considering that the house is 92 years old, they're remarkably level and even, although they do squeak a bit.

It appears that the previous owner pulled up the carpet and had all the wood floors refinished about four years ago, but I'm hoping that he didn't pay very much as the refinishers did a horrible job.

First: They didn't bother to sand all the way around the radiators, they didn't sand all the old finish off in some places, they attempted to rectify some squeaks by pounding 8d nails into a bunch of boards, and they did a real half-assed job on the stairs (esp. the risers). Lastly, they didn't bother to pull up the quarter-round (aka "the shoe") between the baseboard and the floor, despite the fact that a) it was pulling away from the floors in some places, b) the floor under the shoe was dark dark dark, and c) it looked like crap with a dark line running under the shoe around the room.

They repaired a hole in the middle of the foyer by gluing in a small divot of wood (which popped out shortly thereafter, I can only imagine). The bullnose ledge leading to the basement looked like a dog had chewed half of it off. Lastly, it looked like the floor had been stained in some areas and not at all in others--the master bedroom floors looked positively white while the rest of the floors were just light.

Add to that the fact that the house was rented out for the last few years, and you wind up with some pretty darned trashed floors. The northwest bedroom was gouged so badly that it looks like someone had been dragging boat anchors around in there.

So in preparation for the Floor Guys coming tomorrow, I pulled all of the quarter-round up in all of the rooms where we're going to be having the floors refinished (which comes down to every room except the kitchen and the sun room). They offered to do this, but I figured that it was a good way to get to know the house and how it all goes together. In the process of doing this, I discovered that the northwest bedroom appears to have had a fair amount of its oak trim replaced at some point--with pine trim. Lovely... just lovely. And for an encore, pulling the quarter round off in some areas really highlighted just how badly the previous refinishers had gouged the floor in some places.

Think I'm exaggerating? See for yourself. 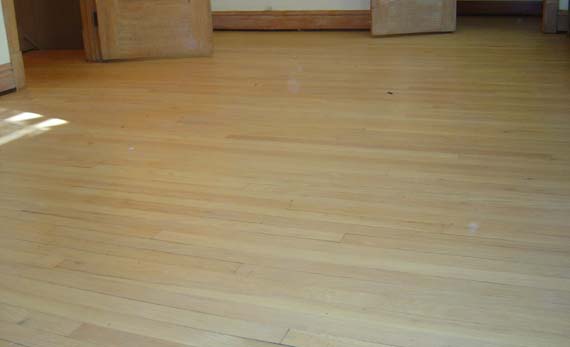 And the lovely finishing job they did around the radiator in the master bedroom: 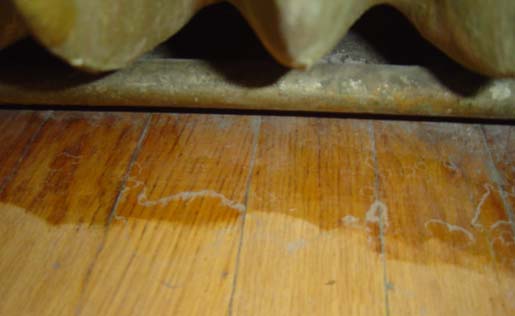 Some beautiful gouges from the northwest bedroom: 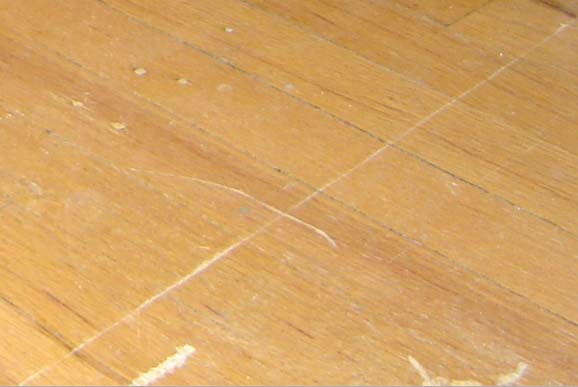 One of the better looking steps: 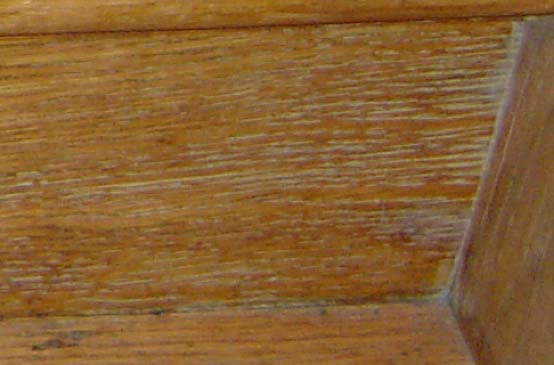 And lastly, the wonderful hole in the middle of the foyer: 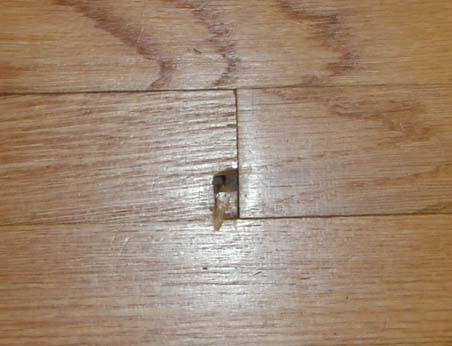 When our inspector went into our basement, he spotted a small (12" x 14") steel trap door which was painted shut and remarked that "It looks like you've got an FCS, but it's not working. I found out that FCS stands for "Flood Control System" which I suppose would have been nice to have working, I guess.

Well, The Plumber tried to crowbar this door open, unsuccessfully, so went back to his truck and came back with a 5 pound maul and started banging on that door like it had run over his dog. Eventually, the door loosened up, and he pulled it open to discover what I thought was just a bunch of dirt

He scraped away the dirt to find the end of a piece of 6" ceramic sewer pipe with some sort of plug in it. When he pulled the plug out, I looked down about 4 feet of pipe to see the main sewer line that goes from the catch basin (behind the house) to the city sewer under the street. No FCS anywhere in sight... just an access pipe to the sewer. Real exciting stuff, I know, but it was all new to me as I had no clue that anything was going on that far under my basement.

So The Plumber got his sewer rodding machine out and rodded out the sewers, sending a 4" cutter back to the catch basin, and a 6" cutter out to the city sewer, pulling back several handfuls of tree roots that had found their way into the pipe junctions at several places.

So we've got a clean sewer now. Isn't that exciting? I think so too.