The phone that was in the rafters has now been hung from a rafter, so we've got a permanent corded phone in the basement.

We discovered that the ceiling not only hid the beautiful rafters, but also some of the crappiest, hackiest wiring I've ever seen. Looking into my crystal ball, I see a fair amount of rewiring in my future.

The back part of the basement has some craptacular wood panelling (the cheapo fake kind that costs $1.79 for a 4'x8' sheet). I've decided to leave this be for now, but I had to pull a sheet off to get one of the ceiling boards down, and behind the panelling I found, Surprise! A row of furring strips! Behind that, the lower half of the wall was actual cement covered foundation, and the upper half was a plaster wall, which, aside from being covered in a ton of cobwebs and dust, seemed to be in pretty good shape. I punted and tacked the panel back into place for now... I can't afford to get started on that project now.

We went to Home Depot and picked up a few porcelain light fixtures (the cheepie kind that screw right into a junction box) and S. installed them in place of the suspended ceiling light boxes while I banged away at the nails in the furring strips.

And now it's time for a few bottles of Ibuprofen.

The first time I saw the Old Man, I went inside the basement, took one look at the drop ceiling in there and realized that it had to go.

It's the standard 12" x 12" cardboard-type acoustic tiles, and the front half of the basement (the "Concrete Block Room") was covered with them, with the exception of a few spots where they had been torn out to run new plumbing lines.

This left us with about 6'8" of height in the basement, with the exception being the steel i-beam that runs from the front to the back of the house... the bottom of the beam is only about 6'6" from the floor.

I went and picked up my nephew, S., to help me out. We got to the house and went straight to work in the basement. We each took a hammer and a wrecking bar and made short work of the furring strips in the front of the basement. Granted, we were slowed down by the fact that the furring strips were 32" or shorter, and each strip was held in place with anywhere from 3 to 8 nails. Whoever hung this ceiling must have been a pessimist.

In the end we were left with a 5' high pile of furring strips (with lots of nails sticking out) and some very sore arms (at least my arms were sore... S. seemed just fine)

It turned out that under all of those tiles and furring strips were some *gorgeous* rafters. Instead of the typical 12' 2x6's, we've got 24' 2x10's, and since they've been covered by a ceiling pretty much since the house was built, they look brand new and don't exhibit any of the oxiding that you'd expect to see in a 92 year old house. At some point in the distant past, there was a plaster ceiling, as the bottoms of the rafters exhibit the tell-tale white lines running across them: 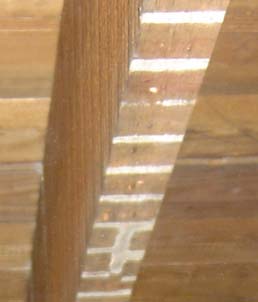 Anyway, I'll try and remember to take an "after" photo, but for now, here's a "before" photo

and a "during" photo 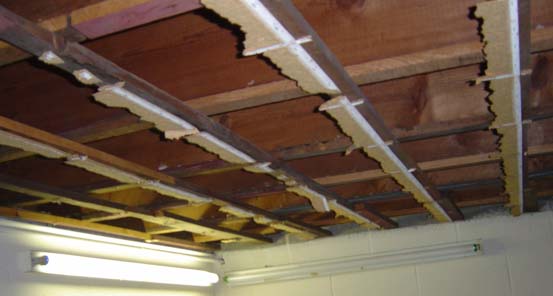 In the back of the basement, only about 1/4 of the ceiling had tiles left, and instead of furring strips, they used 1x6's, so it only took about 20 minutes to tear all that out. However, it took quite a boring while to bend nails into the furring strips and stuff them into garbage cans--we got about 2/3 of the strips disposed of.