The doorbell was, not surprisingly, non-functional, and while the chime mechanism is hanging in the foyer, the chimes were nowhere to be found. We managed to find the one wireless doorbell that has actual chimes, so our doorbell doesn't sound like the door chime at the dollar store.

We picked up a few cheap lamps and put them on timers to give the place at least a slight look of occupation until we can get moved in. Then the Second Floor Guy came with his four-year-old son to give us an estimate. Second Floor Guy was very nice, and his son was kind enough to dust off our steps and half of our living room by crawling and sliding around playing with a toy.

Suffice to say that the floors are filthy--the house has been empty for months.

Walking back from lunch, we met a few neighbors on the street and found out the backstory behind the house across the street. 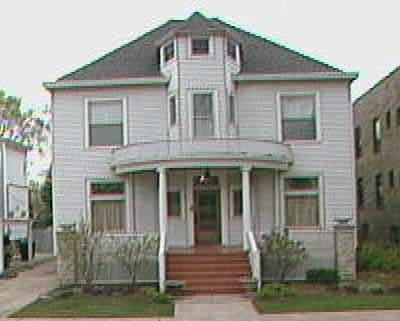 It's a beautiful home with 12 foot ceilings, plenty of stained glass, and a backyard that would give Buschart Gardens a run for its money. It was for sale about the same time as our house, so we snooped around when it had an open house, but was waaaaay too big for us (not to mention way too pricey). As I told the Mrs., we'd need GPS's and walkie-talkies to find each other in there.

The weird thing about the house was that, according to city records, the owner had purchased it a year ago, and was now selling it. This is somewhat unusual to begin with, but even moreso in the case of this house, which has some historical significance (despite the aluminum siding--ick).

Anyway, the neighbor who lives to the left of this house explained to us that the owner bought the house and moved in with his wife and young daughter. Six months later, they moved out and into a new house in the suburbs.

It turns out that their daughter had been eating lead paint chips and got really sick. Really scary stuff.

When we first looked at this house, we knew it was going to need a lot of work--in the typical fashion that old houses do; however, only time will tell if I'm prepared for the never-ending projects that this house is going to provide me with. I've got a fairly itching fix-it finger, so for now, I'm pretty excited.

I got to the house at about 7AM with my cup of coffee to find that our phone service wasn't working. Oddly enough, the buttons make tones, but I get no dial tone. Weird.

My first action as a new homeowner was to liberate the back gate to the alley, which was so overrun with vines that you couldn't see where the gate ended and the fence began. I celebrated by pulling down a few ceiling tiles in the basement, but more on that later.

After picking up the Mrs. and making the first (of what I'm sure will be many) deposits at Home Depot, the Glass Guy came over to measure our front door for a new pane of glass.

The front door is original, but somewhere along the line, the bevelled glass that was in it got replaced by a piece of plexiglass. Not only is this brutally ugly, but it's also patently unsafe, so it's got to go. We're getting a quote for a 22" x 58" piece of bevelled tempered glass, so that it will look very much like the original glass in the door.