Having lived in either an apartment or a condo for the last 10 years, I haven't given out Halloween candy in ages, so I was really looking forward to doling out the goodies today (even though we didn't so much as have a pumpkin outside for decoration). We had about 140 pieces of candy to give out: we started at 3:30 and by 6:00 we were completely out.

Now I guess I'm just Halloween-Naive, but I expected lots of little kids escorted by their parents. What I didn't expect were: The teenagers who couldn't be bothered to stop talking on their cell phones as they stuck their swag-bags in my face; the parents trick-or-treating (actually asking for candy!) along with their kids; the "ring the doorbell 12 or 15 times" morons.

Maybe 40% of the kids that came to the door remembered to say "Thank you", and a few of them seemed downright annoyed that they had to trek all. the. way. up our front steps just to gather their candy. I didn't need any costume help to be the Cranky Old Curmudgeon.

We purchased a whole carload of stuff for the house this weekend--our first load of "Household Items" like bathroom towels, rugs and hardware, shelf liner and rugs for the kitchen, and a bewildering array of other odds and ends that you just wind up having to buy when you move into a new home. We even got an awesome big ole front door mat for folks to wipe their feet on.

M. spent the bulk of today straightening and cleaning up the main floor of the house and lining the kitchen cabinets. She put all our purchases away, put some rugs down, and got the powder room and kitchen reassembled since we're finally done with the painting.

Oh, and she relocated all the tools and junk that I left lying all over the Dining Room and Kitchen to the basement where they belong, so that helped considerably. While it's not a home yet, it's starting to look a little less like a cavern/garage/dump and a little more like we could actually live here.

The storage closet in the Southwest corner of the basement turned out to be the home of a delightful mix of flammable goodies, including: Paint stripper (the really nasty Methylene Chloride stuff), Polyurethane, some miscellaneous paint, bug killer, weed killer, and a few othert toxic gems. Is it really that hard to get rid of these things, people? The wards in our city have an "Amnesty Day" every year when you can dispose of hazardous materials like this without paying a penalty--you've just got to cart it over to the disposal site.

For now, it's off to the garage with the lot of it--I just want it out of my house.

Further Misadventures in the Basement

After being out of town for a week, I thought I was ready to tackle the basement again. Well, little did I know that the basement was ready for me--just lying in wait.

I don't know for sure what it was that came out of the ceiling boards--it's mostly fine white powder and some white grainy stuff, but M. suspects that it's the plaster dust from when the original plaster basement ceiling was demolished years ago.

Back to the basement bathroom. While I finished ripping out the bottom bits of that, I decided to take some time to rip out the panelling on the North wall of the basement, West of the bathroom. This turned out to be an adventure, but in the end, it yielded only small surprises. 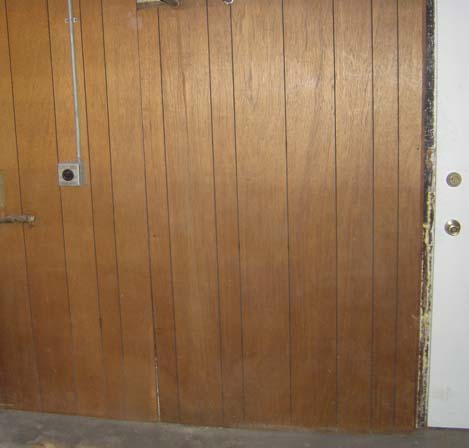 Your typical panelling nightmare, right? Removing the panelling revealed sheetrock over some simple framing. Here's what that looked like (with some of the sheetrock already removed). 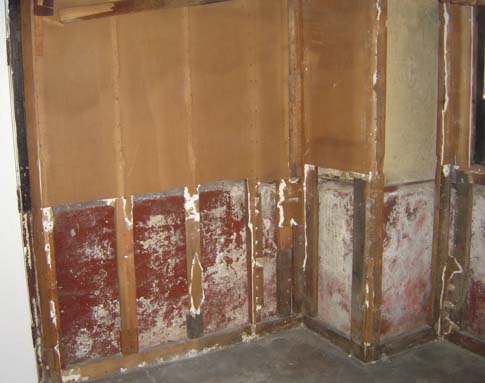 And after I removed the sheetrock and some of the framing, I was left with the original basement wall:

That's the original foundation, which exhibits some small cracks as well as signs of efflorescence (not as bad as I expected), and the original plaster wall above (which has a small bit of water damage at the bottom). So the foundation along here (and presumably the rest of the North wall) is going to need some patching and some painting, but only after we rip out the driveway, expose the foundation, and seal and repair the outside first. From what I've been told, just fixing the inside is only going to hide the problem.