Tonight, M. took scrub brush, squeegee, bleach, and Pine Sol to the front storage areas in the basement (under the front steps and the sun porch). Looking at the floors, you'd guess they were pretty clean, but after seeing the black water in her bucket, you might want to revise that guess.

While she took on the storage rooms, I donned a a full-on respirator and neoprene gloves and took on the mold in the bathroom. 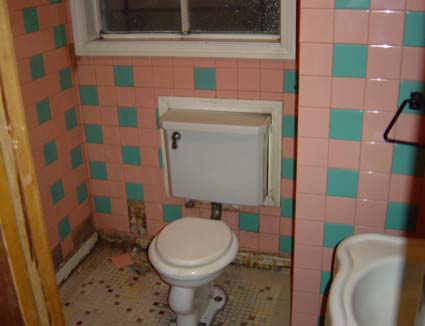 I started by prying the tiles off of the wall near the floor behind the toilet. I worked my way upward until I found no more mold, and then removed another two rows just for good measure--this took me to about 18 inches off the floor. Then I ripped out the sheetrock as well--near the floor it was so soft that it just crumbled off in my fingers, as did the baseboard and the boards that it was nailed to. This area was obviously really badly damaged. I worked my way around the bathroom in this manner, and after filling three contractors garbage bags (which are pricey, but totally, worth it), I was pretty much done. Here's what it looked like when I was done: 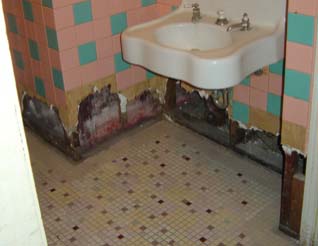 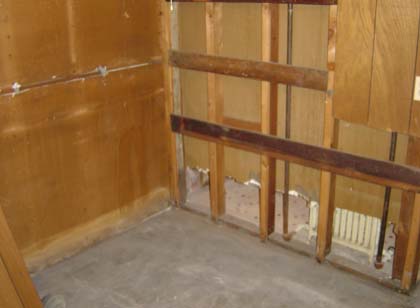 So I've finished the job for now (getting the moldy bits out), but the rest of the bathroom has to go eventually since a) I don't want a bathroom here and b) the bottom of the framing is rotten.

The entire area that I had just demolished was bone dry--M. and I both agreed that the moldy sheetrock and the beetly wood (remember the wood beetles) was damaged a long time ago. It looks like the basement has been dry for a while (well, at least 4 or 5 months I'd guess).

At the advice of several websites, I didn't use any water or bleach or anything in the cleanup--I did it all dry, and swept up afterward with a small brush and some sweeping compound (another awesome thing to have around when you have a basement). I'm guessing that using water (even if it's in a bleach solution) may possibly cause the mold to spore and spread around the basement. I don't know for sure, but eventually, I'll be carefully sweeping the area again and give it the bleach treatment once I get the rest of the wood out of there--when I'm done I don't want anything but concrete left.

M. just finished scrubbing the storage rooms, and wow can you tell the difference! I've mentioned before that I'm not a fan of finished basements--I firmly believe that a basement should be a storage area and work area. Just because it's not finished doesn't mean it's gotta be a dusty catacomb. :) We'll get the rest of the basement scrubbed before moving in 'cause I don't want to be tracking that dirt into the house. Ick.