I finished putting the fourth (and final) coat of paint on the kitchen tonight. After I finished, I went downstairs to check out how the basement's doing. Turns out, now that the basement's reasonably swept out and the radiators are on, I can smell mold in the basement bathroom.

First, a little bit about the basement bathroom:

It doesn't look like it's been used in a million years. The toilet is stuffed with a rag and bone dry. The sink is an old cast iron sink that's horribly etched due to a faucet that's probably leaked since Truman was president. And the tile...

The tile is pink. And green. And plastic. I'm not kidding.

It seems like it's only half of the bathroom that it used to be... there's the remnants of a shower outside of the doors, and obvious signs of half-assed demolition around the edges. Basically, it's a dump and I knew from the moment I saw it that it had to go--I just didn't think it would have to go this soon.

At some point in the past, this side of the basement got some "seepage" caused by, I can only presume, the reverse grading of the driveway outside and a gutter that didn't drain far enough away from the house. We knew this when we bought the house, but the basement has always had a dry "feel" to it, and I've never smelled mold before.

So I grabbed my putty knife and pried a few tiles off next to the toilet, and sure enough, there's mold: 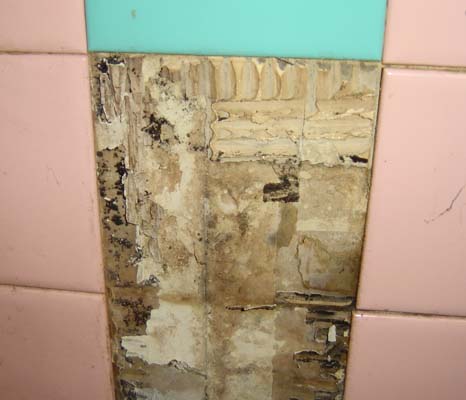 I have no idea how far to the left or right it goes, or how bad it is under the other tiles, but having seen enough TV shows where toxic mold has swallowed some poor schmuck's house whole, I have to say that I'm pretty freaked out by it. I half expect to come back to the house tomorrow and find some mold monster engulfing half the basement.